Local area network (LAN) campus and building backbones, as well as data center backbones, are migrating to higher cabled fiber counts to meet increasing system bandwidth needs. Ribbon optical cables are now being deployed to meet this need, as they provide the highest fiber density relative to cable size, maximize utilization of pathway and spaces and facilitate ease of termination. This article may provide some knowledge of ribbon optical cable.

Ribbon optical cable is now being widely used in campus, building and data center backbone applications where fiber counts of more than 24 are required. This kind of fiber optic cable offers robust performance equivalent to the stranded loose tube cable. It provides the maximum fiber density relative to cable diameter when compared to stranded loose tube and tight-buffered cable designs. The cable design characteristically consists of 12 to 216 fibers organized inside a central tube. There are two kinds of jacket material for ribbon optical cable. Non-flame-retardant jacket material is often used in outdoor applications while flame-retardant outer jackets are used for indoor applications. Picture below shows a basic construction of ribbon optical cable. 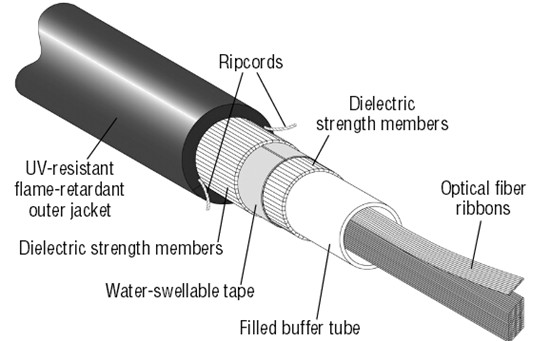 For many years, people have been reluctant to use ribbon optical cable in the LAN and data center because 12-fiber ribbon fiber optic cable field terminations were limited. With the introduction of field-installable 12-fiber array connectors, 12-fiber ribbons are easily terminated with simplex and duplex connectors such as LC or SC connectors or with the MTP connector. The MTP connector (shown in the picture below) is a 12-fiber push/pull optical connector with a foot-print similar to the SC simplex connector. These high-density connectors are used to significantly accelerate the network cabling process, minimize errors and reduce congestion in patch panels.

Today, the MTP connector is commonly available in preterminated form—as a pigtail to be spliced onto a 12-fiber ribbon, or as a MTP patch cord which is terminated on each end (shown in the picture below). Many end-users are now using preterminated cables where the cable is factory terminated with MTP connectors and/or simplex or duplex connectors to ensure the highest quality connector insertion loss and return loss performance and to expedite the cable installation.

Optimal cabled fiber density in data-center pathway and spaces is important to facilitate efficient cooling systems as well as for removal of abandoned cable in accordance, so it’s essential to maximize use of pathway and spaces. Ribbon fiber cables offer up to 45 percent space savings, and three times the fiber-tray capacity over traditional bulkier cable solutions. At the same time, it also minimizes the cable tray weight.

Because the ribbon optical cable offers the highest fiber packing density to maximize pathway and space utilization in ducts and raceways as well as patch panels, it is now being deployed in areas where stranded loose tube and tight-buffered cable have historically been used. Fiberstore provide all kinds of ribbon optical cables (12 to 216 ﬁbers) and MTP connectors, as well as MTP truck patch cables with low price and high quality. For more information, please visit www.fs.com.

Offering considerable improvements from previous FC speeds, 16 Gbps FC uses 64b/66b encoding, retimers in modules, and transmitter training. Doubling the throughput of 8 Gbps to 1,600 Mbps, it uses 64b/66b encoding to increase the efficiency of the link. 16 Gbps FC links also use retimers in the optical modules to improve link performance characteristics, and electronic dispersion compensation and transmitter training to improve backplane links. The combination of these technologies enables the 16 Gbps FC to provide some of the highest throughput density in the industry, making data transfers smoother, quicker, and cost-efficient.

Although 16 Gbps FC doubles the throughput of 8 Gbps FC to 1600MBps, the line rate of the signals only increases to 14.025 Gbps because of a more efficient encoding scheme. Like 10 Gbps FC and 10 Gigabit Ethernet (GbE), 16 Gbps FC uses 64b/66b encoding, that is 97% efficient, compared to 8b/10b encoding, that is only 80% efficient. If 8b/10b encoding was used for 16 Gbps FC, the line rate would have been 17 Gbps and the quality of links would be a significant challenge because of higher distortion and attenuation at higher speeds. By using 64b/66b encoding, 16 Gbps FC improves the performance of the link with minimal increase in cost.

As seen in Figure 2-1, a Fiber Channel ASIC that is connected to an SFP+ module has a coupler that connects to each encoder. The speed-dependent switch directs the data stream toward the appropriate encoder depending on the selected speed. During speed negotiation, the two ends of the link determine the highest supported speed that both ports support.

The second technique that 16 Gbps FC uses to improve link performance is the use of retimers or Clock and Data Recovery (CDR) circuitry in the SFP+ modules. The most significant challenge of standardizing a high-speed serial link is developing a link budget that manages the jitter of a link. Jitter is the variation in the bit width of a signal due to various factors, and retimers elliminate most of the jitter in a link. By placing a retimer in the optical modules, link characteristics are improved so that the links can be extended for optical fiber distances of 100 meters on OM3 fiber. The cost and size of retimers has decreased significantly so that they can now be intergrated into the modules for minimal cost.

Another important feature of 16 Gbps FC is that it uses transmitter training for backplane links. Transmitter training is an interactive process between the electrical transmitter and receiver that tunes lanes for optimal performance. The 16 Gbps FC references the IEEE standards for 10GBASE-KR, which is known as Backplane Ethernet, for the fundamental technology to increase lane performance. The main difference between the two standards is that 16 Gbps FC backplanes run 40% faster than 10GBASE-KR backplanes for increased performance.

OM4 SC to SC fiber patch cord feature an extremely high bandwidth–4700MHz*km, more than any other mode. They support 10GB to 550 meters and 100GB to 125 meters. These cables are suitable for high-throughput applications, such as data storage. These cables are fully (backwards) compatible with 50/125 equipment as well as with 10 gigabit Ethernet applications. These connectors utilize a UPC (Ultra Physical Contact) polish which provides a better surface finish with less back reflection. With the OM4 cables, you can use longer lengths than OM3 cables while still having an excellent connection.

We offer a huge selection of single and multimode patch cords for multiple applications: mechanical use, short in-office runs, or longer runs between and within buildings, or even underground. Gel-free options are available for less mess, and Bend Insensitive cables for minimizing bend loss, which can be difficult to locate and resolve.

Fiber optic cables are the medium of choice in tele communications infrastructure, enabling the transmission of high-speed voice, video, and data traffic in enterprise and service provider networks. Depending on the type of application and the reach to be achieved, various types of fiber may be considered and deployed.

Multimode cable has a large-diameter core and multiple pathways of light. The two most commnon are 50 micron and 62.5 micron.

Multimode fiber optic cable can be used for most general data and voice fiber applications, such as bringing fiber to the desktop, adding segments to an existing network, and in smaller applications such as alarm systems. Both 50- and 62.5-micron cable feature the same cladding diameter of 125 microns, but 50-micron fiber cable features a smaller core (the light-carrying portion of the fiber). Also, both also use either LED or laser light sources.

Although both can be used in the same way, 50-micron cable is recommended for premise applications (backbone, horizontal,and intrabuilding connections) and should be considered for any new construction and installations. The big difference between the two is that 50-micron cable provides longer link lengths and/or higher speeds, particularly in the 850-nm wavelength. 50 micron OM4 fiber optic cable now save up to 30% off sale in our store, if have interest, search Fiberstore on google.

Single-mode cable has a small 8–10-micron glass core and only one pathway of light. With only a single wavelength of light passing through its core, single-mode cable realigns the light toward the center of the core instead of simply bouncing it off the edge of the core as multimode does.

Multimode and single-mode patch cables can be simplex or duplex.

Simplex has one fiber, while duplex zipcord has two fibers joined with a thin web. Simplex (also known as single strand) and duplex zipcord cables are tight-buffered and jacketed, with Kevlar strength members. Because simplex fiber optic cable consists of only one fiber link, you should use it for applications that only require one-way data transfer. For instance, an interstate trucking scale that sends the wieght of the truck to a monitoring station or an oil line monitor that sends data about oil flow to a central location.

PVC cable (also called riser-rated cable even though not all PVC cable is riser-rated) features an outer polyvinyl chloride jacket that gives off toxic fumes when it burns. It can be used for horizontal and vertical runs, but only if the building features a contained ventilation system. Plenum can replace riser, but riser cannot be used in plenum spaces.

“Riser-rated” means that the jacket contains PVC. The cable carries a CMR (communications riser) rating and is not for use in plenums.

Distribution-style cables have several tight-buffered fibers bundled under the same jacket with Kevlar or fiberglass rod reinforcement.These cables are small in size and are used for short, dry conduit runs, in either riser or plenum applications. The fibers can be directly terminated, but because the fibers are not individually reinforced, these cables need to be broken out with a “breakout box” or terminated inside a patch panel or junction box.

Breakout-style cables are made of several simplex cables bundled together, making a strong design that is larger than distribution cables. Breakout cables are suitable for conduit runs and riser and plenum applications.  Fiberstore supply high quality Multi-purpose Breakout Cables which facilitates easy installation of fiber-optic connectors. Buy Bulk Fiber Optic Cable on our worldwide online store with your confidence.

There are two styles of fiber optic cable construction: loose tube and tight buffered. Both contain some type of strengthening member, such as aramid yarn, stainless steel wire strands, or even gel-filled sleeves. But each is designed for very different environments.

Loose-tube cable is specifically designed for harsh outdoor environments. It protects the fiber core, cladding, and coating by enclosing everything within semi-rigid protective sleeves or tubes. Many loose-tube cables also have a water-resistant gel that surrounds the fibers. This gel helps protect them from moisture, which makes loose-tube cable great for harsh, high-humidity environments where water or condensation can be a problem. The gel-filled tubes can also expand and contract with temperature changes. There are many fiber cable types of loose tube, for example, ADSS Cable is used by electrical utility companies as a communications medium.

But gel-filled loose-tube cable is not the best choice when cable needs to be routed around multiple bends, which is often true in indoor applications. Excess cable strain can force fibers to emerge from the gel.

Tight-buffered cable, in contrast, is optimized for indoor applications. Because it’s sturdier than loose-tube cable, it’s best suited for moderate-length LAN/WAN connections or long indoor runs. It’s easier to install, as well, because there’s no messy gel to clean up and it doesn’t require a fan-out kit for splicing or termination. You can install connectors directly to each fiber.