Data centers generally accommodates hundreds or even thousands of network switches, it happens when you have to connect switches from different vendors (i.e. switch X from Cisco and switch Y from HP). As the switches only fit their own brand-based fiber optic transceiver, the main issues thus falls into this: is it possible to contact two different vendor’s fiber optic transceiver module and form a viable link? The answer is yes – but you still have to take some critical aspects into account. 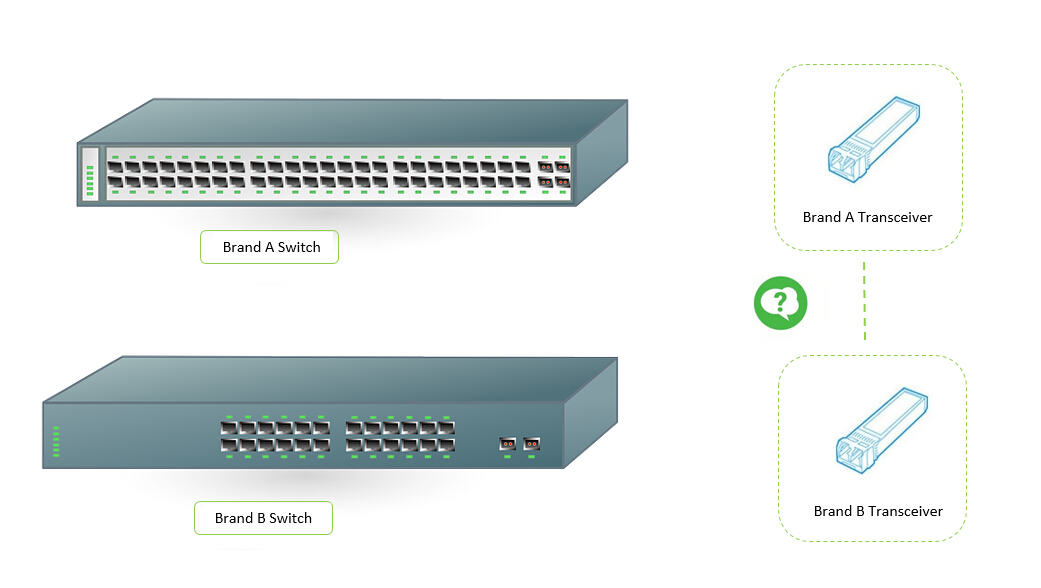 Case Study: Standard of Fiber Optic Transceiver is the Key

Sometimes people have to mix switches and fiber optic transceivers, mainly because the following reasons:

There exist quite a lot standards and protocols concerning fiber optic transceiver. Although many installers are very familiar with linking different vendor’s switch, the others are still worried that the incompatibilities of two transceivers may impede the link performance. They may come across the questions like “Can I order a 1000BASE-LX transceiver from any source and it will be compatible with all others 1000BASE-LX?” or “Would a link with a Juniper 1000Base-LX and a Cisco 1000BASE-LX transceiver work?”

Ideally it should work. 1000BASE-LX is a standard the same way 1000BASE-T is, except that it uses fiber as the transmission medium. You’ve already known that any copper interfaces with 1000BASE-T is interoperable since they are defined by the same 1000BASE-T standards. So you can expect the same with fiber 1000BASE-LX interfaces –  which are all defined by 1000BASE-LX. While this is true on the fiber side of the system, and should be true on the thing with the fiber optic transceiver socket. In fact, you can rest assure as SFP is multi-vendor standard that specified by a multi-source agreement (MSA). And it is a popular industry format jointly developed by many network component vendors.

Connecting SFP optical transceivers from two different vendors still have some other restriction, since SFP transceivers differs from one another in protocol, interface type and transmission distance.

Ethernet Protocol: You have to pay attention that you use fiber optical transceiver of the same protocol at each end, for example: both sides with SX, LX or whatever is currently in use. Otherwise, you have to undertake the risk of link failure.

Cable Type: The fiber optic transceivers on each end must use the same fiber type. An SFP made for multimode fiber isn’t going to work well, if it does at all, with single-mode fiber. Same applies with other multimode fiber types: although mixing various 50 um fibers (OM2 and OM4) may work OK depending on data rate and distance. As long as each end is the same fiber type, you can mix vendors and even connector types, such as SC on one end and LC on the other end.

It is hence safe to say that when connecting two fiber optic transceivers from different fiber optic transceiver manufacturers, you can expect your fiber patch cable to lead a consistent link as long as you use modules of the same Ethernet protocol, cable type and working wavelength. FS provides fully compatible optical transceivers with affordable price and decent performance. For more information, please visit www.fs.com.

All About Compatibility: Third-Party vs Brand Optics 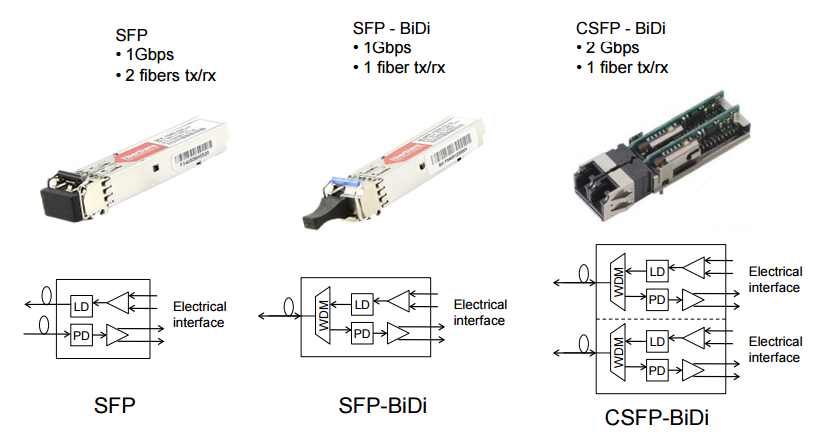 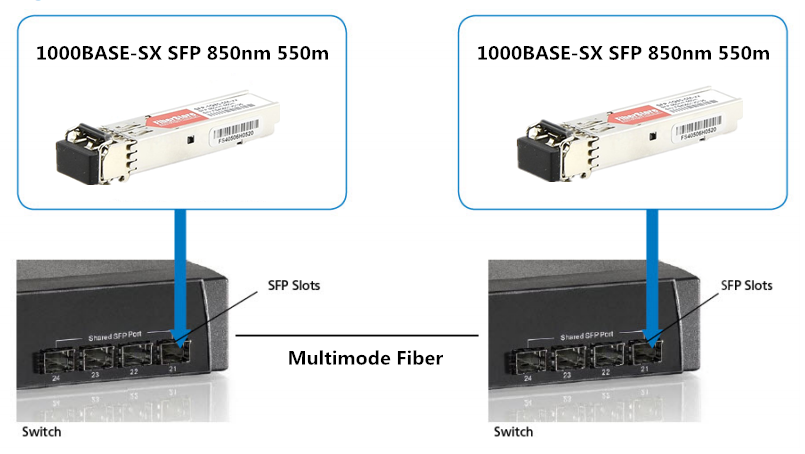 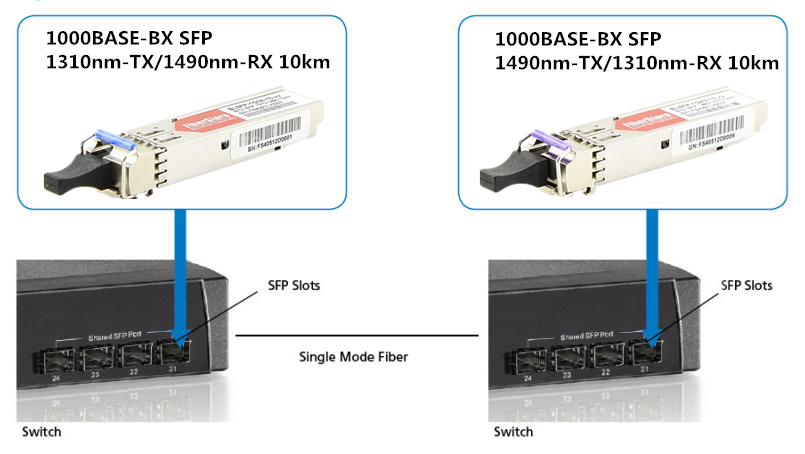 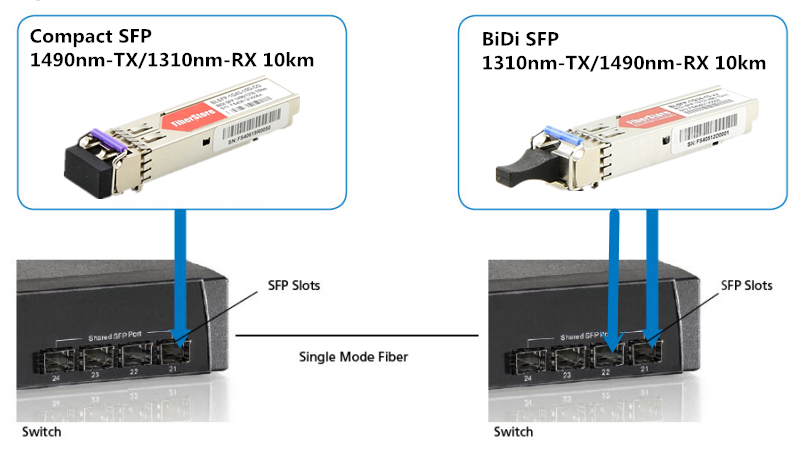 With the growth of virtualization, cloud-based services and applications like VoIP, video streaming and IP surveillance, SMB networks need to extend beyond simple reliability to higher speed and performance. The NETGEAR ProSAFE XS712T and ProSAFE XS728T switches present the right solution for this requirement, delivering unprecedented non-blocking 10G bandwidth at an affordable cost. Have you ever used NETGEAR 10Gb switch in your network? This article may provide the knowledge of NETGEAR 10G switch deployment and its interface requirement.

NETGEAR 10G Switch Overview
As shown in the figure below, the NETGEAR ProSAFE XS712T and ProSAFE XS728T are powerful smart managed switches that come with either 12 or 24 10G copper ports and either 2 combo SFP+ (XS712T) or 4 additional dedicated SFP+ ports (XS728T) for 10G fiber links. Using these 10G slots, you can create high-speed connections to a server or network backbone. For example, you can connect switches to each other with high-speed links or link them to high-speed servers. Please note that the XS712T can provide 100M/1000M/10G copper connectivity, but the XS728T can only provide 1000M/10G copper connectivity. Fast Ethernet is not available for XS728T switch.

How to Connect NETGEAR 10G Switch to Your Network?
The NETGEAR ProSAFE XS728T and XS712T switch is designed to provide flexibility in configuring your network connections. It can be used as your only network traffic-distribution device or with 100 Mbps (XS712T only ) , 1000 Mbps, and 10 Gbps hubs and switches.

The RJ-45 copper ports of the NETGEAR ProSAFE 10G series switch comply with IEEE 10GBase-T standards. It is backward compatible, auto-negotiating between higher and lower speeds. You can use Category 5e (CAT 5e) or better Ethernet cable (CAT 6, CAT 6a, or CAT 7) to make 10G connections. AMONG, CAT5/CAT5E are supported for Gigabit speeds up to 100 meters. CAT6 twisted pair copper cabling supports 10-Gigabit speeds up to 45 meters. CAT6A or newer CAT7 cabling will allow for up to 100 meter 10GBase-T connections. Desktop switching of NETGEAR ProSAFE XS728T is shown in the figure below. 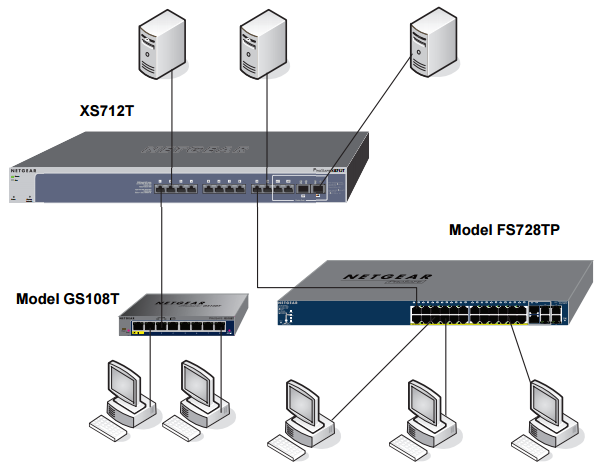 As HD content becomes the norm in video and broadcasting industry, the limitation to transporting HD video on a network have a bigger impact on budget, responding to this demand in HD video transmission, FiberStore releases the 3G HD digital video SFP transceiver families address issues raised by the data-scrambling algorithms used in DV, enabling digital video to be transported over optical network using standard transceivers,” says Dan Ligon, director and principal analyst for SMPTE. “We are ensuring that we meet this demand in a highly-efficient and cost-effective manner, while providing a superior service experience to our customers.