To meet the large demand for high capacity transmission in optical access systems, 10G-PON (10G Passive Optical Network) has already been standardized by IEEE (Institute of Electrical and Electronics Engineers) and ITU (International Telecommunication Union). To enable the development of future optical access systems, the most recent version of PON known as NG-PON2 (Next-Generation Passive Optical Network 2) was approved recently, which provides a total throughput of 40 Gbps downstream and 10 Gbps upstream over a single fiber distributed to connected premises. The migration from GPON to 10G-PON and NG-PON2 is the maturity of technology and the need for higher bandwidth. This article will introduce the NG-PON2 technology to you.

What Is NG-PON2?
NG-PON2 is a 2015 telecommunications network standard for PON which was developed by ITU. NG-PON2 offers a fiber capacity of 40 Gbps by exploiting multiple wavelengths at dense wavelength division multiplexing (DWDM) channel spacing and tunable transceiver technology in the subscriber terminals (ONUs). Wavelength allocations include 1524 nm to 1544 nm in the upstream direction and 1596 nm to 1602 nm in the downstream direction. NG-PON2 was designed to coexist with previous architectures to ease deployment into existing optical distribution networks. Wavelengths were specifically chosen to avoid interference with GPON, 10G-PON, RF Video, and OTDR measurements, and thus NG-PON2 provides spectral flexibility to occupy reserved wavelengths in deployments devoid of legacy architectures.

NG-PON2 Advantages
The NG-PON2 technology is expected to be about 60 to 80 percent cheaper to operate than a copper based access network and provides a clear undeniable performance, capacity and price advantage over any of the copper based access networks such as Fiber to the Node (FTTN) or Hybrid Fiber Coax (HFC). At present, three clear benefits of NG-PON2 have been proved. They are a 30 to 40 percent reduction in equipment and operating costs, improved connection speeds and symmetrical upstream and downstream capacity.

Reduced Costs
NG-PON2 can coexist with existing GPON and 10G-PON systems and is able to use existing PON-capable outside plant. Since the cost of PON FTTH (Fiber to the Home) roll out is 70 percent accounted for by the optical distribution network (ODN), this is significant. Operators have a clear upgrade path from where they are now, until well into the future.

Improved Connection Speeds
Initially NG-PON2 will provide a minimum of 40 Gbps downstream capacity, produced by four 10 Gbps signals on different wavelengths in the O-band multiplexed together in the central office with a 10 Gbps total upstream capacity. This capability can be doubled to provide 80 Gbps downstream and 20 Gbps upstream in the “extended” NG-PON2.

Symmetrical Upstream and Downstream Capacity
Both the basic and extended implementations are designed to appeal to domestic consumers where gigabit downstream speeds may be needed but more modest upstream needs prevail. For business users with data mirroring and similar requirements, a symmetric implementation will be provided giving 40/40 and 80/80 Gbps capacity respectively.

With the introduction of NG-PON2, there is now an obvious difference between optical access network and copper access network capabilities. Investment in NG-PON2 provides a far cheaper network to operate, significantly faster downstream and upstream speeds and a future-proof upgrade path all of which copper access networks do not provide, thus making them obsolete technologies. Telephone companies around the world have been carrying out trials of NG-PON2 and key telecommunication vendors have rushed NG-PON2 products to market.

What Is an Optical Power Meter? 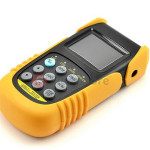 When to Use Optical Power Meter?
When you install and terminate fiber optic cables, you need to test them. A test should be conducted for each fiber optic cable plant for three main areas: continuity, loss, and power. In order to do this, you’ll need a fiber optic power meter.

How to Use Optical Power Meter?
When you measure fiber optic power with a power meter, you should attach the meter to the cable. Turn on the source of power, and view the meter’s measurement. Compare the meter measurement with the specified correct power for that particular system to make sure it have proper power not too much or too little . Correct power measurement is so important to fiber optic cables because the system works similar to electric circuit voltage, and the power must be just the right amount to work properly.

Tips for Selection and Operation

There are many devices elementary but necessary for the Passive Optical Network (PON) applications that require the transmission, combining, or distribution of optical signals. These passive devices include the Optical Splitter/Coupler, Optical Switch, Optical Attenuator, Optical Isolator, Optical Amplifier, and WDM Filters (CWDM/DWDM Multiplexer) etc. Tips: The passive devices are components that do not require an external energy source.

When working with these passive devices it is important to have a basic understanding of common parameters. Some of the basic parameters that apply to each device are Optical Fiber Type, Connector Type, Center Wavelength, Bandwidth, Insertion Loss (IL), Excess Loss (EL), Polarization-Dependent Loss (PDL), Return Loss (RL), CrossTalk (XT), Uniformity, Power Handling, and Operating Temperature.

Many passive devices are available with receptacles or fiber optic pigtails. The pigtails may or may not be terminated with a fiber optic connector. If the device is available with a receptacle or connector, the type of receptacle or connector needs to be specified when ordered. You should also note the type of optical fiber used by the manufacturer of the device to ensure it is compatible with the optical fiber used for your application.

Center Wavelength is the nominal operating wavelength of the passive device.

Bandwidth (or bandpass) is the range of wavelengths over which the manufacturer guarantees the performance of the device. Some manufacturers will list an operating wavelength range instead.

Tips: IL, EL, PDL, RL are all measured in decibels(dB).

Uniformity is a measure of how evenly optical power is distributed within the device, expressed in dB as well as XT. For example, if a device is splitting an optical signal evenly into four outputs, how much those outputs could vary from one another is defined by uniformity. Uniformity is typically defined over the operating wavelength range for the device.

Power Handling describes the maximum optical power at which the device can operate while meeting all the performance specifications defined by the manufacturer. Power handling may be defined in mW(milliwatt) or dB, where 0 dBm is equal to 1 mW.

Operating Temperature describes the range of temperatures that the device is designed to operate in. This can vary significantly between devices, because some devices are only intended for indoor applications while others may be used outdoors or in other harsh environments.

FiberStore news, on June 6th, 2013, Infonetics Research principal analyst Jeff Heynen said, broadband aggregation equipment market got a poor start this year, although the performance of various regions and different technical aspects is different, but the overall revenue began a continuous decline from the first quarter of last year.

“EMEA (Europe, Middle East and Africa) suffered a heavy blow, the region DSL, PON and FTTH equipment sales in this region declined by 27% compared with last quarter, ending the growth of previous three consecutive quarters. The EPON sales in the Chinese market have fallen sharply, but due to China Telecom and China Unicom continuing deploy FTTH GPON-based to provide 20M access services, GPON equipment sales in the region has achieved eight consecutive quarters of growth. Meanwhile, as operators increase investment to resist the competition of DOCSIS 3.0 technology, the North American market contrarian, successfully avoided a quarter of weakness as its previous peculiar”, said Heynen.

Due to seasonal and Russia, the Middle East carriers initial GPON equipment purchase tide coming to an end, and PON equipment sales in EMEA fell sharply by 50% after achieved double-digit growth in two consecutive quarters;