You may want to connect your desktops, laptops, printers and other machines at your home to the internet and achieve the information sharing. Perhaps you just want to connect your smart phone via WiFi when you’re at home to reduce the usage of your mobile data plan. To complete that, all you need to know is how to build a home network. There are lots of ways to set one up. I’ll introduce the basic setup for the most common case. For person that already have a network, I’II tell ways about how to expand the existing home network in this blog too.

The basis of your home network will be Ethernet. This word has a very specific technical meaning, but in common use, it’s simply the technology behind 99% of computer networks. Most computers now come already equipped with an Ethernet adapter – it’s the squarish hole that accepts Ethernet cables.

Usually, your broadband connection being cable, DSL, or something else will first go through some kind of device typically called a modem. The modem’s job is to convert the broadband signal to Ethernet. You’ll connect that Ethernet from your broadband modem to a broadband router. Router, as its name implies, is used to “route” information between computers on your home network and between those computers and the broadband connection to the Internet. Each of your computers already has an Ethernet adapter. An Ethernet cable will run from each computer to the router and another cable will connect the router to the modem.

Most laptops and portable devices (and even a few desktops) support wireless connection via a technology known as WiFi. WiFi is a short-range wireless technology that you need to provide on your home network, if you want to be able to use it. The most common approach to include wireless capabilities in your network is by using a wireless router.

The number of internet-connected devices that we now deal with is pretty amazing. A typical wireless router or router with a wireless access point can easily handle dozens of devices connected wirelessly. However, wired devices may present problems. Many home routers – wired or wireless – come with only a limited number of connections. It’s common for there to be exactly five connections: one for the internet (“WAN” or modem) and then four for networked devices.

If all you have is a four-port router, adding that fifth device looks like a problem. The simple solution is to use a switch. A switch is a semi-intelligent network extender. Its job is simply to make sure that data coming in on any port is sent to the other correct port to reach its intended destination. That’s really all it is. All ports on a switch are equal. In the example below, one port of the switch is connected to one of the ports on the router to which a computer might have been connected. Other computers are then connected to the switch. Switches come in many sizes and often add much more than just a few ports. Common configurations for the home include 8 or 16-port switches.

Build a home network is very easy. Usually, the modem is provided by ISP. All you need to buy is the router and some Ethernet cables. FS.COM provides cat5e, cat6 and cat6a Ethernet cables with many color and length options. Snagless boot design prevents unwanted cable snags during installation and provides extra strain relief. Besides, custom service is also available. For more details, welcome to visit www.fs.com or contact us over sales@fs.com.

Nowadays wireless networks are almost at every home. And surely you hear people around talking about the wireless equipment from time to time. Among, wireless router is the most familiar one in our lives. However, we’ve heard more and more about the word “wireless access point” or “AP” recently. What’s the wireless AP? Is it the same as the wireless router? What’s the difference between them? Wireless access point vs router: the difference between them will be introduced in this blog.

What Is a Router?
Most anyone who has an Internet connection has a router. A router is a device that routes packets between different networks. A typical consumer router is a wireless router and it has two network interfaces: LAN (including WLAN) and WAN. It serves to connect a local area network (LAN) to a wide area network – Internet (WAN). That is to say if we want to connect to Internet, we must use a router. Routers on the other hand can manage an entire home or small business giving network capability to many computers and devices simultaneously, either wired or wirelessly (when wireless router used).

What Is a Wireless Access Point?
As for wireless access point (AP), it’s commonly wire connected to Ethernet network’s router, hub or switch and then to create a simple wireless network. This was done by using a Ethernet cable to connect a switch and a AP and the AP would then communicate with WiFi devices and giving them network access. Wireless access point does not route anything. It just converts an existing wired network (LAN) into a wireless one (WLAN). A router can be a access point but a access point can’t be a router. 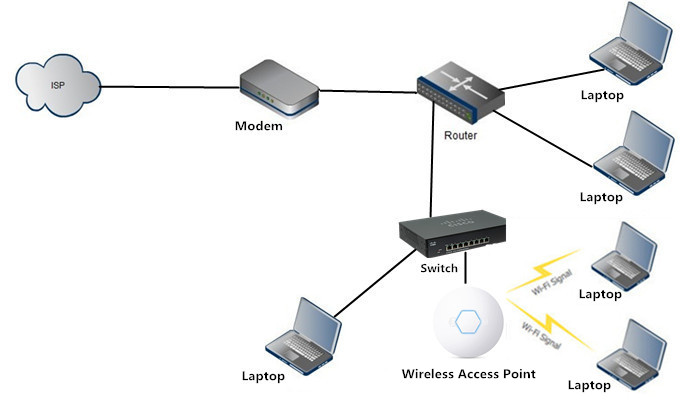 Wireless Access Point vs Router: Which One should I Buy?
Before routers became standard with built in WiFi, we must use a wireless AP to connect wireless devices to our network. However, now that most any router has built in WiFi and plays many roles including being a AP, many don’t use dedicated AP as they have in the past. Then wireless routers are common place in any network today but often there are weak WiFi signals or dead spots in any network. A wireless access point can be added in locations that have bad wireless network ability help with WiFi dead spots and extending a wireless network.

Conclusion
In conclusion, access point vs router: if you want build more reliable wireless network, you may need a wireless access point. If you just want wireless network at home to cover only several people, the wireless router is enough. Today’s wireless AP is widely used in business and larger hotspot WLANs to cover a bigger area or to support hundreds of users. In larger WLANs, it usually makes sense to have several APs feeding into a single, separate router. FS.COM provides several wireless access points with high performance to support resilient wireless access services for use in enterprise offices, schools, hospitals, hotels and more.