With the wide use of optical fiber cables, more and more people show their interests in plenum fiber optic cable, which is also called OFNP cable. In order to learn about this cable, first of all the meaning of the word “plenum” will be explained. And then we may introduce what the plenum fiber optic cable is. At last, applications of the OFNP cable will be described.

What does a Plenum Area Mean?

A Plenum area is a building space used for air flow or air distribution system. In most buildings, the area above a drop ceiling or under a raised floor is used as the air return (source of air) for the air conditioning. Those drop ceiling and raised floors are also where fiber cables are often installed. The concern is that during a fire, if there is burning material in a plenum air space, smoke and fumes can travel through air ducts to the whole building. For this reason, there are codes to restrict the types of materials (such as cables) that can be placed in the plenum. 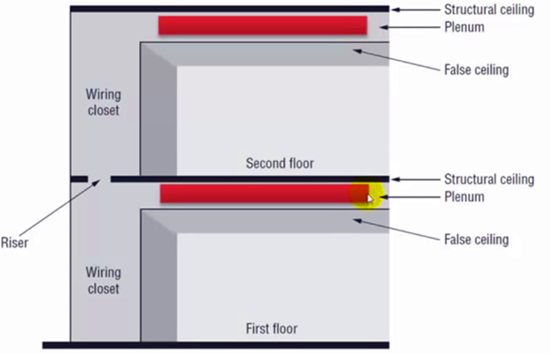 In terms of plenum fiber cables, the plenum refers to a cable jacket. National Electrical Code (NEC) requires indoor fiber optic cables be marked with their fire and smoking ratings. According to NEC, a building’s inside area is divided into three types of sections: plenums, risers and general purpose areas. So there are three types of cable jacket in all: plenum, riser, and general purpose. Among plenum cables are held to the most stringent testing of any of the cables rated by the NEC, rated for both flammability and smoke generation.

What is a Plenum (OFNP) Fiber Cable?

OFNP stands for Optical Fiber Nonconductive Plenum. OFNP is the designation given by the National Fire Protection Association (NFPA) to interior fiber optic cables which contain no electrically conductive component, and which are certified for use in plenum applications. They are engineered to prevent the spread of fire from floor to floor in a building. It is generally intended for horizontal runs especially within an air handing conduit. This type of cable complies with the Underwriters Laboratories (UL) fire safety test Plenum/910. They can be installed in ducts, plenums and other spaces used for building airflow. This is the highest fire rating fiber cable and can’t be replaced with any other cable type.

Since plenum cables are routed through air circulation spaces, which contain very few fire barriers, they need to be coated in flame-retardant, low smoke materials. These materials offer good resistance against possible fire, so plenum (OFNP) fiber cables have fire-resistance and low smoke production characteristics. And even if in the event that they do begin to burn, they will not emit large quantities of harmful fumes. For these reasons, these plenum fiber cables provide a low cost option for gigabit Ethernet network applications and are used for running in walls and air plenums without the use of conduit. If you want to buy this kind of effective cable, I recommend you to visit Fiberstore, which offers fully typed OFNP fiber patch cables (SC, FC, LC, ST, MU, MTRJ, E2000, MTP etc) at only 3 dollars each.