Driven by the undeniable growth in demand for bandwidth of private and public cloud data centers, 25G Ethernet over a single lane has become the new trend for sever-to-switch interconnections. And the increasing requirements of higher speeds in data centers have enhanced the adoption of 25G switch, which is the new buzz in recent years. In this post, a simple analysis of 25G Ethernet switch market and comparison of commonly used 25G switches will be explored.

As we know, before 25G technology advent, the existing options are one lane for 10G, four lanes for 40G, or four lanes at 25Gbps for 100G. The 25G technology meets the specification for existing module form factors like SFP28 and QSFP28, and allows for a breakout connection between 25G and 100G without changing the port on the front of many 100G switches. Besides, driven by the high speed and bandwidth, various network switch manufacturers have announced their new 25G switches in recent three years, just to occupy more market shares.

At the same time, 25G SFP28 transceivers, DACs, and AOCs also spring up like mushrooms. According to a study by Dell’oro, Ethernet switch revenue will continue to grow through the end of the decade, with the biggest sales forecast for 25G and 100G ports. 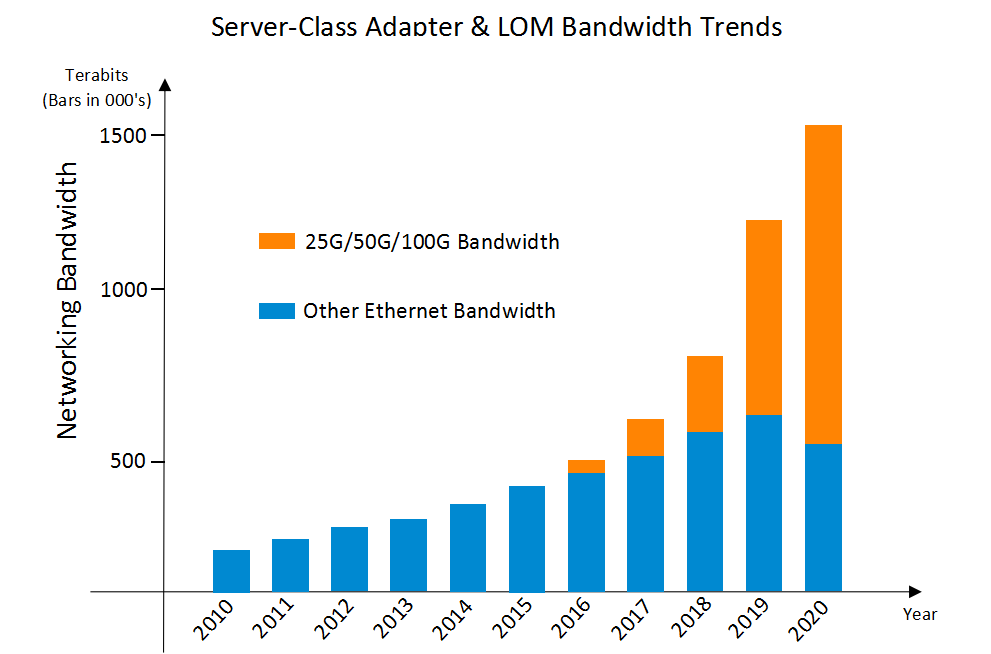 Notes: the source of the research: Crehan research.Inc

From the research we can see, at least in the next three years, 25G/50G/100G bandwidth will continue to grow and occupy half of the total network bandwidth, which in turn enhances the development of 25G switch market. Though challenges still exist for 25G Ethernet, it’s not denied that the trend for ToR 25G switches cannot be blocked.

Comparison Between Commonly Used 25G Switch in the Market

As have mentioned above, 25G SFP28 switch market is booming due to the growing speed and bandwidth as well as switch vendors promotion. Then how to achieve the optimized network performance with existing 25G Ethernet switches, and control the total investment at the same time? Firstly, let’s take a 25G network switch comparion among the commonly used ones.

All the 25G SFP28 switches listed in the table have the same port configuration: 48 SFP28 ports and 6 QSFP28 uplink ports. And there are ToR/Leaf switches. Usually 25G SFP28 switch is often used for switch-to-server applications, as for how to realize this, please read the article: How to Use 25G Switch for Switch-to-Server Connection.

For choosing ToR 25G switch, if you have no limited cost budget, Cisco 25G switch maybe a not bad choice, because except for the expensive price, it has high-level performance and configuration as well as its good reputation. All these make Cisco switches are perfect for data centers. Of course, other 25G SFP28 switch vendors like Dell, Brocade and Mellanox also provide good options for migration from 10G, 25G to 50G and 100G networks.

However, for those who have a tight budget or do not pursue brand, a more wise choices is to buy 25G switch like FS.COM N8500-48B6C. This switch supports ONIE installer for 3rd party network operating systems and compatibility with SDN (Software Defined Networks) via OpenFlow 1.3.11. And it also supports the advanced hardware based VXLAN feature to support over 16M virtual networks, making it a suitable option for cost-effective data center solutions.

25G switch offers a more convenient way to migrate to 100G network. Because it reduces the numbers of cables and switches needed in network designs, which in turn decrease the CAPEX and OPEX. Facing with the fast evolving 25G switch market, are you ready for it?