As you may know that a network switch with no network operating system (NOS) is referred to as a bare metal switch. Unlike a white box switch with vendor’s own or 3rd party already loaded NOS, a bare metal switch allows you to load a network OS according to your own will. After installing the NOS, these two types of switches are normally regarded as the same. Then, how to choose network OS systems for bare metal switches? Listed below are three popular choices, namely Cumulus Linux, IP Infusion OcNOS™ and Pica8 PICOS.

Cumulus Linux is a powerful open network OS designed by Cumulus Networks to help build and operate large data center networks. Therefore, the Cumulus Linux is a perfect match for a data center switch which operates in bigger networks such as enterprise, data center and metro Ethernet scenarios. It is a true Linux distribution with a hardware abstraction layer that runs on a variety of commodity hardware. Cumulus Linux uses automated tools to manage the network infrastructure and hopes to automate the configuration of network switches with these existing tools. 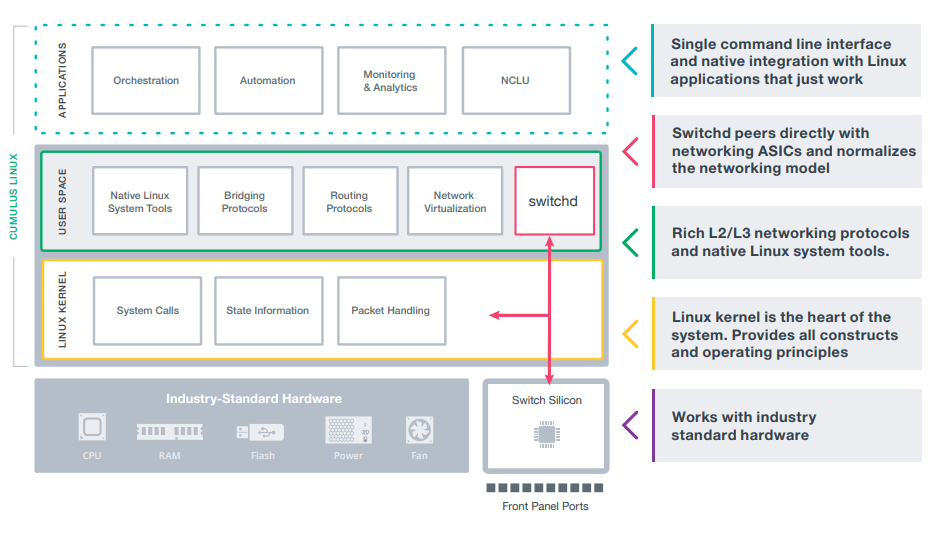 OcNOS™ is designed to address the needs of public, private or hybrid cloud networks. It offers Carrier-grade network OS for bare metal switches. It includes many advanced capabilities such as extensive switching and routing protocol support, MPLS, SDN, etc.

In addition to providing industry standard CLI, OcNOS™ supports all standard MIBs , other standard operation and management tools as well. The main features are:

The PICOS is also an open Linux-based network OS built on the robust Debian Linux environment for bare metal switches. It supports all major L2 and L3 switching. What’s more, it can leverage a vast array of standard Linux tools and supports IPv4 and IPv6 static routing as well.

In addition to the basic features mentioned above, the PICOS supports other functions depending on its two different editions. For PICOS enterprise edition, it supports CrossFlow dual control plane technology for improved OpenFlow integration, scale, and management. For PICOS SDN edition, it uses OpenFlow to control MPLS, GRE, NVGRE or VXLAN tunnels, delivering on the promise of open programmability.

From all the above, you may have a general understanding of the three main network OS systems. You can choose a proper one according to your actual needs. For example, if you need a Debian-based Linux distribution NOS with Clos solution for a 40GB switch, Cumulus Linux is a wise choice.

How to Select Transceivers for White Box Switch?