What is the XFP Transceiver?

The XFP transceiver (10 Gigabit Small Form Factor Pluggable) is a standard optical transceivers for high-speed computer network and telecommunication links that use optical fiber. It was defined by an industry group in 2002, along with its interface to other electrical component switch is called XFI. A XFP module is a device comprising both a transmitter and a receiver which are combined and share common circuitry or a single housing. 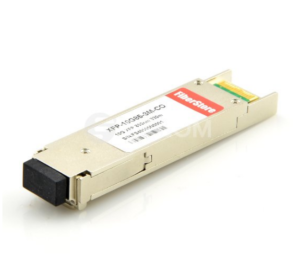 The XFP specification was developed by the XFP Multi Source Agreement Group. It is an informal agreement of an industry group, not officially endorsed by any standards body. The first preliminary specification was published on March 27, 2002. The first public release was on July 19, 2002. It was adopted on March 3, 2003, and updated with minor updates through August 31, 2005.

4. They can operate over a single wavelength or use dense wavelength-division multiplexing techniques.

5. They include digital diagnostics that provide management that were added to the SFF-8472 standard.

The XFP product line is designed to support 10 Gigabit Fibre Channel, 10 Gigabit Ethernet and OC192/STM-64. Constructed from a metal frame, the cage assembly is designed to be bezel-mounted to an I/O panel with compliant pins for pressing onto the host PCB. The cage assembly features four EMI gaskets, which block any EMI emissions emanating from the transceiver when installed. The front flange provides a flat surface to contact the EMI gasket (attached to the perimeter of the bezel cutout) and stabilizes the cage assembly during insertion and extraction of the transceiver. Heat sinks are optional for applications requiring increased heat dissipation and are attached to the cage assembly using a clip.