The ever-increasing need for higher data rate in mobile data traffic, data centers and cloud services has pushed the access streams from 2.5Gb/s to 100Gb/s, and is demanding for 100Gb/s beyond without a stop. In today’s core network that has deployed 100G rates, there are QSFP28 optical transceivers including SR4, PSM4, CWDM4, LR4, ER4, etc., serving for a maximum 25km transmission distance. And there are 100G AOC, DAC and breakout cables generally for applications of tens of meters. 100G CFP/CFP2 modules including SR10, LR4 and ER4 support transmission distances of 150m to 40km. Until recent years, the telecom service providers are adopting new 100G DWDM technologies in their high capacity and long distance backbone applications. Coherent 100G DWDM transceivers are the first to be deployed for 100G long-haul applications, and then new technologies like PAM4 (Pulse Amplitude Modulation) are developed to meet lengths requirements for 100G metro network. This post is to discuss the issues on coherent and 100G PAM4 DWDM transceivers.

In the past few years, the adoption of 100G DWDM technologies is mainly focused on coherent DWDM optical transceivers, including CFP and CFP2. Until the year 2016, Inphi (a specialist in this area) offers pluggable 100G PAM4 QSFP28 DWDM transceivers to support 80km data center interconnect (DCI). The alternative for 100G DWDM coherent transceiver is given much attention. Besides, this new option for 100G DWDM transceiver also arouses hot discussion on which to choose. Knowing the characteristics and suited applications of them could help in selection.

There are significant differences between QSFP28 PAM4 transceivers and coherent CFP/CFP2 transceivers, but they also have some relations in 100G applications. Contents below will go to details of these optical modules.

Before the announcement of PAM4, binary NRZ (non-return to zero) modulation format is used for 40G and 100G long-haul transmission systems. PAM4 has four distinct levels to encode two bits of data, essentially doubling the bandwidth of a connection. Currently the single-wavelength PAM4 modulation scheme is considered the most cost-effective, efficient enabler of 100G and beyond in the data center. The 100G DWDM transceiver utilizing PAM4 signaling is in QSFP28 form factor. The advantage is that the customers who want to build an embedded DWDM network can use this transceiver directly in the switch. On this side, it is simple and cost-effective solution. But there are some prerequisites: it needs amplification to get out of the blocks and dispersion compensation to go beyond 5-6km. Therefore, a separate DWDM multiplexer with an amplification system and dispersion compensation is required to connect data canters together. 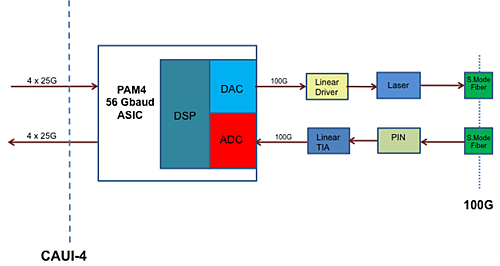 In another case, if the QSFP28 PAM4 module is added to an existing DWDM network, it must be a network already having right dispersion compensation modules (DCMs) and amplification system in place; if it is not, changes are required when QSFP28 PAM4 is later added.

CFP digital coherent optics (DCO) have a high speed digital signal processing (DSP) chip built in. They do not require separate DCMs. This is what makes CFP different from QSFP28. Instead, they have electronic dispersion compensation built in. Although the built-in DSP requires more power and adds cost in components, it releases the switch vendors from adding DSPs to their equipment. Coherent CFPs enables transmission distance of more than 1000km between sites.

CFP2 analog coherent optic (ACO) is half the width of the CFP. Existing CFP2 coherent DWDM optical transceivers are analog and require a separate DSP on the host board to take the full advantages of the coherent features. So it is suited for switch vendors who have fitted such a DSP, but it adds additional cost and power consumption on the main board.

CFP2 digital coherent optic (DCO), expected to be released in the coming two years, is more optimized than CFP2 ACO in that it has built-in DSP. This component will open up to all switch vendors using CFP2 without DSP. With different coherent CFPs optional, customers can pay only for what they need when they need it.

This really should depend on the applications. According to ACG research (an analyst and consulting firm that focuses on the service providers’ networking and the telecom industry), the 100G PAM4 solution and coherent DWDM solution, together with IEEE802.3ba, cover different portions of the optical fiber reach in the data center interconnect. So when deploying a long distance 100G DWDM network with DWDM transceivers, the required transmission distance and available equipment should be taken into consideration when choosing a suitable pluggable module.

Using pluggable transceivers for embedded DWDM, where the DWDM functionality is in the transceiver and not a separate DWDM converter platform, offers the ultimate solution in terms of cost and simplicity. Both 100G PAM4 QSFP28 and coherent CFP/CFP2 are all suited to this approach. They can be used for embedded DWDM networking or as part of an existing DWDM installation. They all enable the advantages of pluggable modules: simple installation, easy spares handling, lower cost of ownership and quick return on invest.